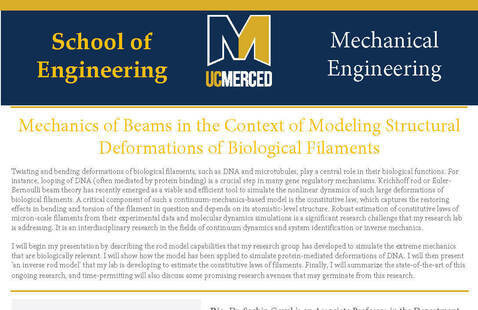 Twisting and bending deformations of biological filaments, such as DNA and microtubules, play a central role in their biological functions. For instance, looping of DNA (often mediated by protein binding) is a crucial step in many gene regulatory mechanisms. Krichhoff rod or Euler-Bernoulli beam theory has recently emerged as a viable and efficient tool to simulate the nonlinear dynamics of such large deformations of biological filaments. A critical component of such a continuum-mechanics-based model is the constitutive law, which captures the restoring effects in bending and torsion of the filament in question and depends on its atomistic-level structure. Robust estimation of constitutive laws of micron-scale filaments from their experimental data and molecular dynamics simulations is a significant research challenge that my research lab is addressing. It is an interdisciplinary research in the fields of continuum dynamics and system identification or inverse mechanics.

I will begin my presentation by describing the rod model capabilities that my research group has developed to simulate the extreme mechanics that are biologically relevant. I will show how the model has been applied to simulate protein-mediated deformations of DNA. I will then present ‘an inverse rod model’ that my lab is developing to estimate the constitutive laws of filaments. Finally, I will summarize the state-of-the-art of this ongoing research, and time-permitting will also discuss some promising research avenues that may germinate from this research.

Dr. Sachin Goyal is an Associate Professor in the Department of Mechanical Engineering at the University of California, Merced, and an affiliate member of the Health Science Research Institute. He is the 2nd faculty member in the department to win the NSF CAREER Award. He has research interests in the areas of continuum mechanics, dynamics and controls with applications to several engineering and biological systems. He started a research program on Biomechanics and Mechanobiology at UC Merced. He received his B.Tech. degree (1997) in Mechanical Engineering from IIT Varanasi, India, and his M.S. and Ph.D. degrees (2006) in Mechanical Engineering and Scientific Computing from the University of Michigan, Ann Arbor. He also has had an industrial experience at Larson and Toubro Limited, India, has held a postdoctoral research appointments with Woods Hole Oceanographic Institution (WHOI) and in at Emory University on Single Molecule Experiments, has served as a faculty in the Indian Institute of Technology (IIT) at Gandhinagar, India and in the Theoretical and Applied Mechanics/ Mechanical and Aerospace Engineering department at Cornell University, and has served as a technical adviser to Timetooth Technologies Pvt. Ltd., India.