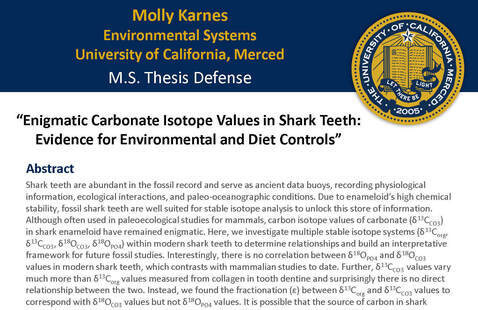 Shark teeth are abundant in the fossil record and serve as ancient data buoys, recording physiological information, ecological interactions, and paleo-oceanographic conditions. Due to enameloid’s high chemical stability, fossil shark teeth are well suited for stable isotope analysis to unlock this store of information. Although often used in paleoecological studies for mammals, carbon isotope values of carbonate (δ13CCO3) in shark enameloid have remained enigmatic. Here, we investigate multiple stable isotope systems (δ13Corg, δ13CCO3, δ18OCO3, δ18OPO4) within modern shark teeth to determine relationships and build an interpretative framework for future fossil studies. Interestingly, there is no correlation between δ18OPO4 and δ18OCO3 values in modern shark teeth, which contrasts with mammalian studies to date. Further, δ13CCO3  values vary much more than δ13Corg values measured from collagen in tooth dentine and surprisingly there is no direct relationship between the two. Instead, we found the fractionation (ε) between δ13Corg and δ13CCO3 values to correspond with δ18OCO3 values but not δ18OPO4 values. It is possible that the source of carbon in shark enameloid is partitioned between dietary carbon and dissolved inorganic carbon (DIC), similar to fish otoliths. We applied the fractionation factor from modern teeth to carbonate isotope composition of fossil shark teeth and found decreasing values from the Cretaceous to modern. Estimates of δ13Corg values in fossils will provide better insight carbon cycling and food web dynamics of ancient marine ecosystems.

Molly is a student in the Environmental Systems graduate program at UC Merced. She received her B.S. in Earth Science from Murray State University in 2018. During her time at UC Merced, she was part of Dr. Kim’s research group and collaborated on array of projects that seek to bridge modern and paleo shark ecology. Her contributions are at the forefront of pushing stable isotope analysis beyond environmental reconstruction for marine predators.

She also has an interest in science outreach and developed a Bobcat Summer STEM Academy workshop for middle school students titled, “Shark Survivor!”